Improvements and ideas for RAW workflow in PhotoLine

Seems PhotoLine can open DNG files with 3:1 and 5:1 compression. This is rather unique option. DNG compression like this used only in some Blackmagic Design cameras and most RAW editing apps can't read files like these at all.
DNG files from these cameras are very special. They designed specially for DaVinci Resolve editor, and so raw data encoded in camera to 12 bit Log instead of 14 or 16 bit Linear. Also seems these DNGs contain incomplete metadata (or it is just missed for purpose), so colors are represented as BMDFilm Wide Gamut and don't transformed correctly to working color space. These files require manual calibration and custom made input ICC profile or input LUT. Those compressed DNGs behave the same "incorrectly" in other apps as well.
PhotoLine UI Icons Customization Project: https://www.pl32.com/forum3/viewtopic.php?f=3&t=6302
Top

shijan wrote: ↑Sat 09 Jan 2021 20:31 I guess problems with highlights clipping also may be just because PhotoLine use too many points for curve. In other raw editing apps those camera curves are way more simplified.
For example here is how same curve look in darktable app and PhotoLine 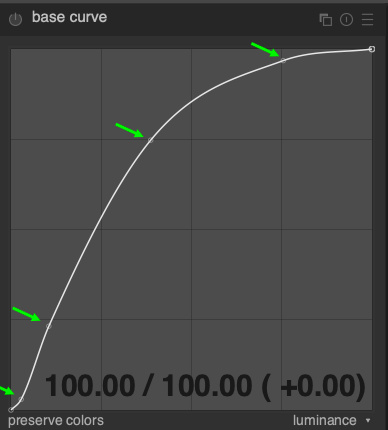 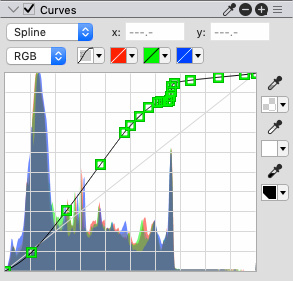 No answer up to now, so I try.
It is not the number of points, that matters for posterization. two horizontally-connected points preceeding a vertically connected point in a relevant distance building a stair in the curve could be sufficient to create posterization by decreasing color depth at least in an area. The same for highlight clipping (special cases: a stair on the right or the left border of the curve resuling in a peak at the beginning or the end of the result histogramm)
Also curve adjustment layers normally do no demosaicing (it's the process creating result colors from mixing colors of a bayer (or different, e.g. from x-trans-) sensor color filter.
Looking at your curve
Clipping: you could have meant an example not chown, the picture part chown at least reveals no clipping.
Regarding the curve, there ist no real highlight clipping, but the last part on the right side righthand from the last peek is not steep, so with low bitdepth, made stronger e.g. by gamma corrections, it could lead to visual clipping.
The same for the stair in the middle, which ist the first real difference compared to the darktable curve.
I would try removing the points in the stair and look, if the grey part recovers.
Normally you adjust curves in a way, that the curve is steeper in parts with peaks in a histogram, if that retains the natural look.
(That way contrast ist increased in parts, where you can see it, whether in parts with fewer pixels the decreased depth catches only a few eyes.)
The darktable curve respects the first big peak, whether the pl curve is - apart from the stair (repecting the last peak (?)) - nearly linear in the area containing relevant counts, which generates an effect similar to tonal correction without contrast weighting.
Strange choices, especially in combination.
Top

Yep, shifted curve points cause the problem. I also noticed that some cameras generate normal curve with less amount of points. Here is example from Fujifilm X-T4. Seems like this thing is still under early testing: 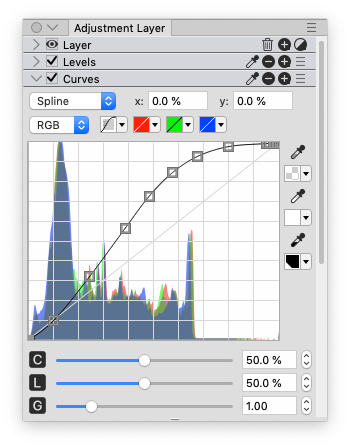 Most modern RAW editors offer Anti Aliasing filtration. I guess in most cases those AA filters are just a Chroma Noise Reduction masked with High Pass filter, so i guess it is more-less possible to emulate it with current PL tools. But anyway, i guess special Anti Aliasing filter in ProtoLine filters list may be very useful.
PhotoLine UI Icons Customization Project: https://www.pl32.com/forum3/viewtopic.php?f=3&t=6302
Top
19 posts