XY fields in "Hue Editor" mini adjustment window are located too far on the right and don't fit well to normal tiny size. I guess it is better to arrange them in same way as in "Curves" tool. 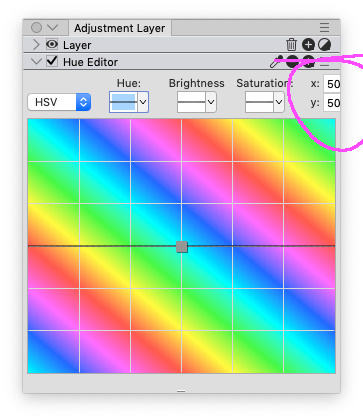 Anbei die PLD-Datei, mit der ich den Test jeweils gemacht habe.
You do not have the required permissions to view the files attached to this post.
Top

It can be used for editing existing pathes, so it is useful even for the Create Line tool.
Top

shijan wrote: ↑Thu 27 May 2021 06:34 If raster image layer is selected and "In Active Layer" is enabled - vector tools create instantly baked raster shape. This is not too practical at all in real life.

That was the initial intention of "In Active Layer" and it was introduced because of user wishes.
That it works also with active vector layers was added later.


shijan wrote: ↑Thu 27 May 2021 06:34Also this conflicts with "Vector Drawing" "Curve Creation" and "Vector Object" tools logic, which are first create new vector layer and then start to add shapes to that layer if "In Active Layer" is enabled.

I guess it is more logical if "In Active Layer" is enabled - all vector tools first should create new vector layer and then start to add shapes to that layer.

I don't know. It definitely contradicts the original intention.

Please do not change this behaviour. It should be possible for these drawing tools to directly work in a pixel layer rather than having to merge afterwards. I actually use this quite regularly, since I work a lot with pixel art and 1bit images (comic line art and scanned/exported CAD drawings).

As a matter of fact, I would love to see the "In Active Layer" to be added to the Lasso tools as well: currently it is impossible to select pixels, and then move / transform them directly.
Instead, PhotoLine forces me to create a copy in a layer, which I then must merge back into the original layer.

When working with pixel art, scans, 1bit images, and precise pixel-based user interface elements, this REALLY adds up in time wasted on copying sections, and merging them back into the original layer again. And there is a risk of forgetting to cut and copy instead, which leaves behind the original pixels, and these may have to be erased afterwards.

It just adds so much extra time to some of my jobs. It is THE last one remaining frustrating workflow in PhotoLine compared to "the industry standard" and other image editors.

With this kind of work an "In active Layer" option to directly manipulate pixels in a bitmap layer with the lasso tools would shave off minutes of work - adding up to hours on a yearly basis for me.

So, please: don't change that "in Active Layer" behaviour. And please with a cherry on top add the "In Active Layer" option to the lasso tools so we can finally manipulate/transform selected pixels directly in the layer itself instead of wasting precious time duplicating pixels to layers and merging them back when it could have been done in one step - with hundreds of manipulations it becomes a real chore...