Here everybody can post his problems with PhotoLine
68 posts

You are my hero!
Top

PhotoLine’s unsharp masking size parameter is different from the radius that other programs use. Here are some actual measurements:
http://www.russellcottrell.com/photo/Ph ... SMSize.htm
You do not have the required permissions to view the files attached to this post.
Top

Thanks Russell. The sharpening video was more than helpful. Well done.
Top

Really very helpful info on sharpening. Thanks for the Videos!

One question remains: first sharpen and then denoise? Or the other way around? Or does it not matter?

There was a thread about sharpening lately.
My general recipe has a slightly different order and is using the difference preview. I'm not that good in adjusting things by look and taste and prefer that obvios hint from that special preview.

Some wishes for your 3rd video on that topic :

Once it made a difference if you were sharpening a Lab layer or an RGB layer in Lab!
First kept color in halos, 2nd turned to white. But I didn't check now if it still applies.
----------------
Herr Doktor, ich bin mir ganz sicher, ich habe Atom! /Doctor, doctor, I'm sure, I've got atoms!
Top

gerryW wrote: ↑Mon 08 Aug 2022 13:57One question remains: first sharpen and then denoise? Or the other way around? Or does it not matter?

I think: At the beginning you try to create the best "input signal"

In theory: The steps should follow the physical process that created the problems, just in opposite direction.

- The lens adds some softness. Final step would be deconvolution, but sharpening as final step is also fine.
- Then the sensor adds some noise. So denoising should be done before sharpening.

After that, software adds some more:
- Demosaicing technically adds noise, meaning more changes to the original signal. But depending on the algorithm it looks smoother.
- Converting color spaces adds some crosstalk to the channels.

If you have RAW, you can try some different demosaicing algorithms in the layer attributes, maybe move the channel mixer somewhere else. But with a Jpg you can't "undo" these 2 software steps.

In practice: So it's not really possible to do each step perfect, but denoise and then sharpen would be more logical. Sharpen increases noise, and the denoise-filter has a kind of edge detection, so it should be better to apply it to the more original edges.
----------------
Herr Doktor, ich bin mir ganz sicher, ich habe Atom! /Doctor, doctor, I'm sure, I've got atoms!
Top

One question remains: first sharpen and then denoise? Or the other way around? Or does it not matter?

As a practical matter, I capture sharpen, then denoise if necessary, because sharpening makes the noise pop out and I can then see what noise to remove. Speaking for myself, it is much harder to assess noise reduction if the image has not been sharpened first. Reversing the order of the layers makes sense, the noise is actually less, but the image is also less sharp, and turning up the sharpening to compensate makes the noise come back; to my eye there is little practical difference.

Also, I never use the difference view; I would rather use the eyeball to toggle the effect on the entire image.


Masking of halos with a black brush in the 2 layers

If it is possible to mask the halos with a brush, they are way too big!
Top

.
When sharpening, a mask is used to only sharpen the edges if possible.
Can't you also use the same mask (but inverted) in denoising to protect the edges so they don't get softened again?

That’s what Threshold does for both tools; but there is not a literal mask.
I think I’m going to redo the video and create the denoise layer under USM; it’s the best of both worlds, and it takes advantage of the fact that PL can put them both on adjustment layers (I think most apps cannot). But I still like sharpening first.
Top

I am working on a video(s) about color management. Neither rendering intent nor blackpoint compensation has any effect when converting between working spaces (ProPhoto to sRGB, for example). There is little written about this but my understanding is, that other program uses relative colorimetric for all such conversions regardless of what is selected. In PL there is no apparent change when converting from a small space (sRGB) to a large one (ProPhoto), so my guess is that it uses RC as well. Is this correct?
Top

As i know it is limitation hardcoded inside Matrix-based ICC profiles itself. Perceptual probably only works for input and output (printer) LUT based ICC profiles. (please correct if i am wrong)
From my tests i see that in PhotoLine as well as in other apps transformation between working spaces always use Relative Colorimetric even if you select Perceptual. So if you transform from smaller to larger color space, original colors positions remains untouched, but only placed inside larger color space container. If you transform from larger to smaller color space extended colors became gently clipped. To be honest i also want to know when Perceptual intent is really works.

For real Perceptual intent when all colors are transformed in uniform way and not clipped to you need to create a LUT and use it with disabled color management. Once I used 3D LUT Maker tool from DisplayCAL https://displaycal.net/#create-3dlut to create color transformation LUTS and compare different intents.

Here is also old chart about color management that may help https://www.pl32.com/forum3/viewtopic.p ... 003#p47003
Color management in Photoline available at many levels so it should be really long video to explain all of that.

My guess non-destructive color management in PhotoLine should be advertised:
Layer, Document and Group in Draw Isolated mode may have their own independent color spaces.
Layer and Document also may have independent bit depths, so you can use some advantages of 32 bit mode in some adjustments, but original layer will remain 8 or 16 bit bit and original file size will not be increased. Small explanation here https://www.pl32.com/forum3/viewtopic.p ... 806#p46806
PhotoLine UI Icons Customization Project: https://www.pl32.com/forum3/viewtopic.php?f=3&t=6302
Top 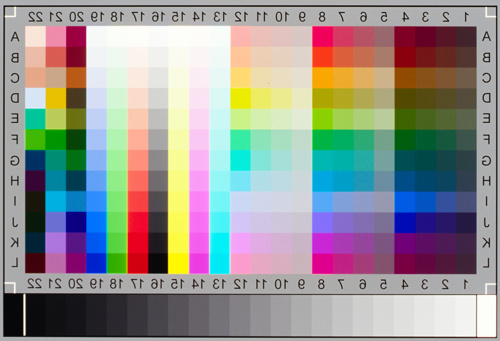 In special measurement app real colors are detected and represented by cloud that fits in sRGB triangle. 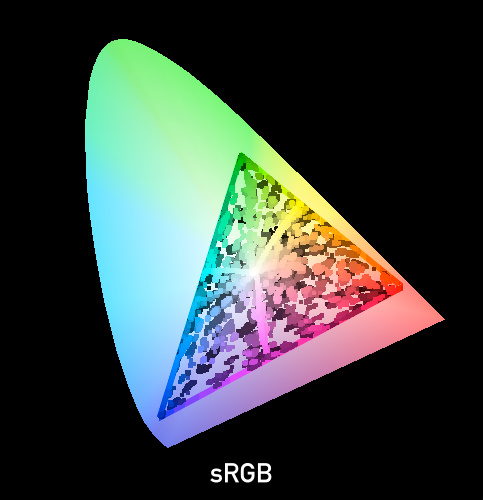 Now if convert image to ProPhotoRGB and select Perceptual in tool settings, actual real life detected colors remains the same, but only color space became extended. This is typical Relative Colorimetric transformation, but not real Perceptual. 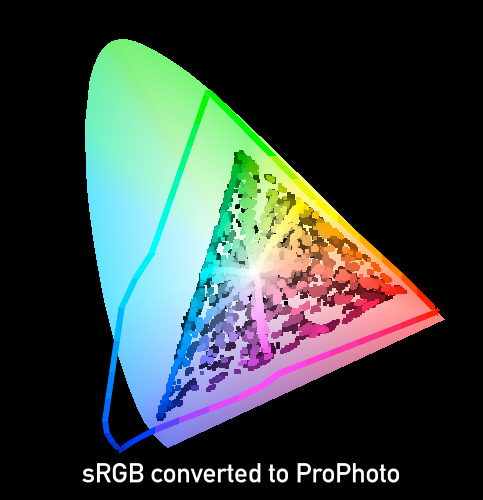 P.S. If it possible, i would like to request option to ignore hardcoded ICC profile limitations and allow to use Perceptual transformation with any ICC profile type. It could be very useful for some special technical cases.
PhotoLine UI Icons Customization Project: https://www.pl32.com/forum3/viewtopic.php?f=3&t=6302
Top

In earlier versions it worked very nice and simple: Set whatever you want ICC profile to Layer/Group/Document and it will remains there in any situation until you manually remove it.
But later based on someones feedback developers decide to change things and automate some things. So currently it is impossible manually force set same ICC profile to Document/Layer/Group. For example if Document set to sRGB and Layers set to sRGB, in Layers you will see empty fields instead of ICC profiles. It means that Layers use same ICC profile as Document (sort of bypass).

And if for some reason i switch Document ICC profile back to sRGB all layers became "bypass" again and everything became ruined again.

To be honest i also want to know when Perceptual intent is really works.

If you make or download a large-gamut printer profile, then convert an image from a small gamut such as sRGB, the difference between RC and perceptual is clearly visible, and BPC works with both as well. My understanding is that the rendering intents are included in the profile itself, and it is printer profiles that have them both. Working space profiles, and I believe even display profiles, are evidently only able to use RC. So you just have to know that when you convert an image between working spaces.
Top
68 posts